What Ghost Around - a sneak peek

Hello dear readers! I'm so excited to be a part of a wonderful cozy mystery anthology run by the one and only Molly Fitz, called WHILE THE CATS AWAY.

All aboard for intriguing mysteries, hilarious banter, and good, clean fun. Grab your copy of WHILE THE CAT’S AWAY to catch up with your favorite characters and meet some new friends along the way. You’ll be oh-so glad you did!

My contribution to the collection is What Ghost Around, and I wanted to share a little snippet of my story. This is a short story in my Ghost Detective series and is only available as part of this collection - details on how to get your hands on it are at the bottom of the post. 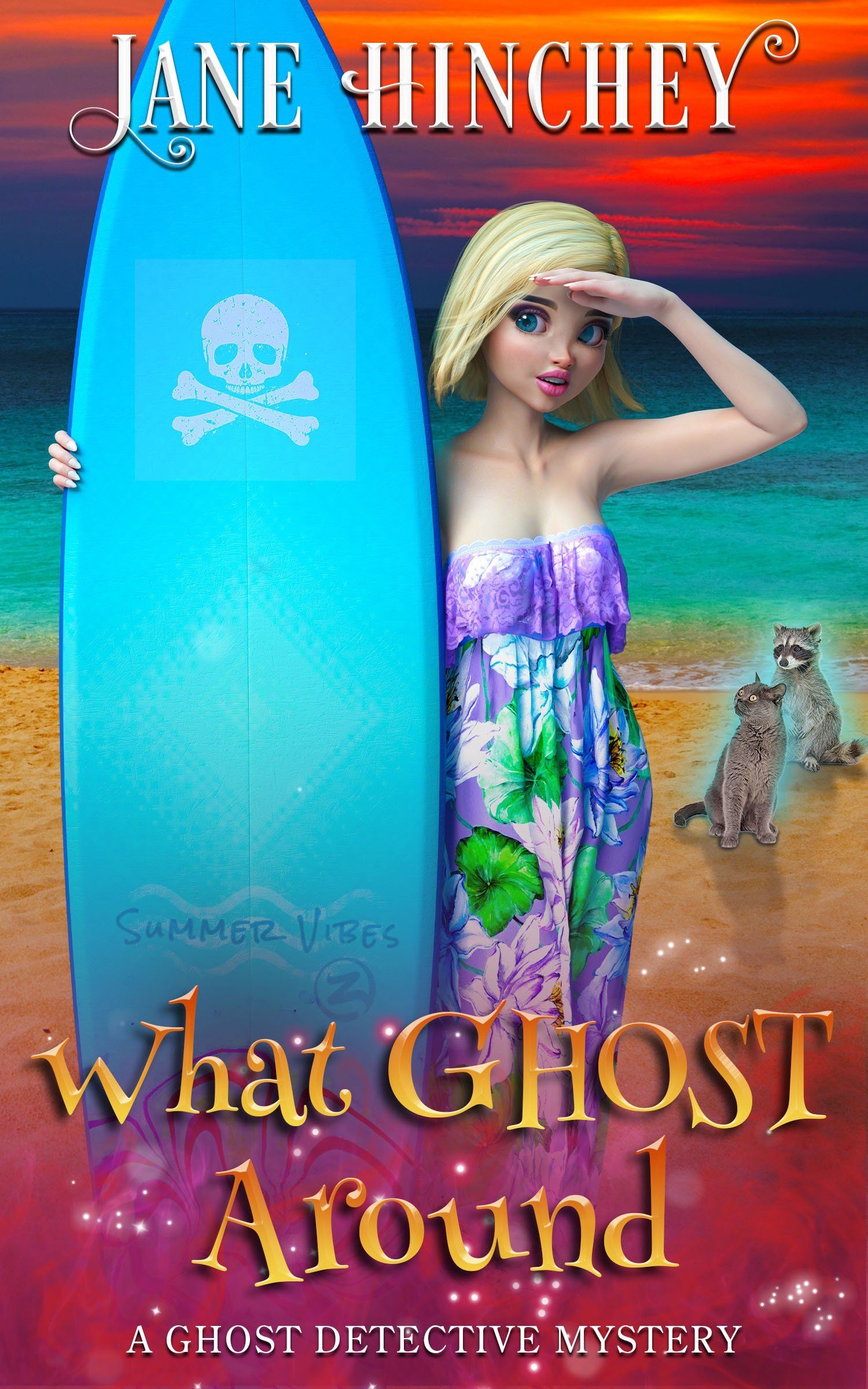 Winning a vacation to Wild Haven Lagoon is as exciting as it is unexpected. After all, the hilarious photo I'd submitted of Thor, my giant teddy bear of a cat, asleep with his face in his food bowl, had been a spur-of-the-moment thing.

I know what you're thinking. Palm trees, sand beneath your feet, an ice-cold cocktail in your hand as you watch wave after wave roll in along the tropical shore. I know this because it's what I was thinking.

Instead, I get a dead surfing instructor, face down in the sand.

Before I can say, Iced Latte, I'm being hounded by the said instructor's amorous ghost, Captain Cowboy Hot Pants, aka Detective Kade Galloway (also my boyfriend), is called in by the local authorities to assist in the investigation, and Thor discovers the biggest sandbox on earth.

Can I keep Thor out of trouble long enough to help find the killer? Or will our vacation be doomed before it's even started?

Find out by grabbing your copy of the multi-author anthology, When the Cats Away. Details below.

What Ghost Around is my story in the When the Cats Away anthology, releasing on 19 August 2021.

Reserve your copy below:

Why I thought surfing lessons were a good idea, I’ll never know. I blame it on the heady excitement of a tropical vacation and one too many cocktails, so when the resort instructor Rory Carr cornered me and insisted the first lesson was free, I’d caved. Rory was one of those good-looking sun-bronzed gods who laid the charm on thick and fast. The compliments fell from perfectly sculpted lips as he flirted outrageously with every female who crossed his path, myself included.

Galloway had tolerated the man’s over-the-top personality good-naturedly and declined the invitation for a surfing lesson. It turned out Galloway was a qualified scuba diver. We’d both agreed it’d probably be safer—for everyone—if I stayed above the water. And that’s how I came to be standing on the beach after breakfast, ready for my surfing lesson while Galloway was off on his first dive tour.

Despite Rory’s penchant for flirting, he was an excellent instructor. I’d been worried he’d be a little handsy, but he was the perfect gentleman, keeping his distance and demonstrating on his own board how to paddle, how to prepare to stand, how to actually stand. We practiced on the sand before heading out into the surf, wading through the shallow water then paddling our boards over the reef that separated the surf from the calmer waters of the lagoon itself.

I was pleased and, well, a little smug when I stood up on my first try and rode the wave all the way to the distant shore. Rory caught the wave with me and cheered me the entire way, telling me I was a natural. I preened at the praise.

What happened is still a bit of a blur. I remember seeing the wave approaching. I remember Rory shouting something, but I couldn’t hear him over the roar of the surf. I remember realizing, a little too late, that this wave was bigger than the others. Stronger. Faster. I remember turning my head to look at Rory for help. What do I do? I remember feeling a sense of panic. I remember thinking I’d simply try and get off my board rather than attempt to ride the giant wave. The wave had crashed over me. I’d slipped sideways, tumbling into the ocean. And that’s when my surfboard hit me in the face.

It is, to date, the hardest thing that has ever hit me in the face, and I’ve had run-ins with several hard objects in my lifetime. I’m clumsy. I can trip over my shadow. I’ve used my face to break a fall on more than one occasion, but this was a whole other level of ouch. Propelled by the force of the wave, the horizontal edge of the board rammed into my lower jaw, chin, and mouth.

Tumbling through the surf, I spluttered to the surface, disorientated.

“Are you okay?” Rory shouted.

I spat out a mouthful of salty water and crimson froth. “I better still have all my teeth.”

“Do I still have them all?” I repeated, baring my teeth at him. He squinted, checking out my pearly whites.

He nodded. “All present and correct. I think you’ve just cut your chin. Let’s go in and take a look.”

Despite his reassurance, I ran a finger along my front teeth and sighed in relief. He was right. None missing. I began paddling back to shore with a nod, collecting my offending board and trying to avoid the waves as I went.

Dragging my board through the sand toward the surf stand set up on the beach, I paused to spit out a mouthful of blood. I swished my tongue around my mouth, unable to feel anything because it was blessedly numb. I was slightly concerned because something was bleeding. A lot. Rory had said I might have a cut on my chin?

He’d gone ahead, muttering about grabbing the first-aid kit, so when he didn’t return immediately, I was only mildly concerned and a little irritated. I huffed and puffed as I dragged my surfboard, which had inexplicably gained a hundred pounds, up the beach, dropping it on the sand in front of the surf stand. The surf stand was more of a lean-to, a rack of shelves for the boards, a clipboard pinned to the side of the much bigger diving hut.

“I’m here.” He stepped from behind the surf stand.

“What’s up?” I asked, raising a hand to my chin. It came away covered in blood. “Can’t find the first-aid kit?”

I snorted. “What? Is it the size of a fridge or something? Lemme see.” I followed him behind the diving hut. There was a giant plastic tub, about the size of a cooler, and through the clear plastic, I could make out a first-aid kit and a bunch of other stuff. But, more alarmingly, next to the plastic tub, I could see the body of Rory Carr, face down in the sand.

His ghost turned to me. “It’s got me totally flummoxed why I can’t, for the life of me, open the tub.”

My eyes widened. Rory Carr didn’t know he was dead. Slightly more horrifying was that I’d been out for a surfing lesson with a ghost. I could have drowned!

“Yeah, I’m fine. It’s you I’m worried about. That cut on your chin is really bleeding.” His eyes wandered from my chin down to my chest, and at first, I thought he was perving, but a quick glance told me that wasn’t the case. The blood had trailed down my neck and was soaking into my hibiscus patterned surf shirt.

“Let me get that first-aid kit,” I muttered, hoping the blood wouldn’t stain. The surf shirt was new. I’d bought it especially for the trip. After unclipping the lid on the tub, I opened the first-aid kit and pressed a wad of gauze to my chin. It stung. A lot.

The blood soaked through the gauze, and Rory got all up in my business, peering at the cut, and that’s when I felt it. The icy chill now he was near. I cursed myself for not noticing before. But then, how could I? I mean, he’d been surfing. He’d had a surfboard with him. Ghosts, in my experience, did not take corporeal objects with them into the afterlife. This was new.

“I think you might need stitches,” he said, turning to the first-aid kit to grab more gauze. Only, of course, he couldn’t. His hand passed right through the red box. “What is with that?” he muttered.

Grabbing more gauze and pressing it to my face, I touched Rory’s arm, quickly snatching my hand away at the icy blast. “Rory. Haven’t you noticed?”

“Noticed what?” He sounded genuinely puzzled.

I pointed to his body. His dead body. “That.”

He followed the direction of my finger and froze. It was as if he’d blocked it out, had refused to believe what his eyes must indeed have been telling him.

He audibly swallowed. “Is that… me?” 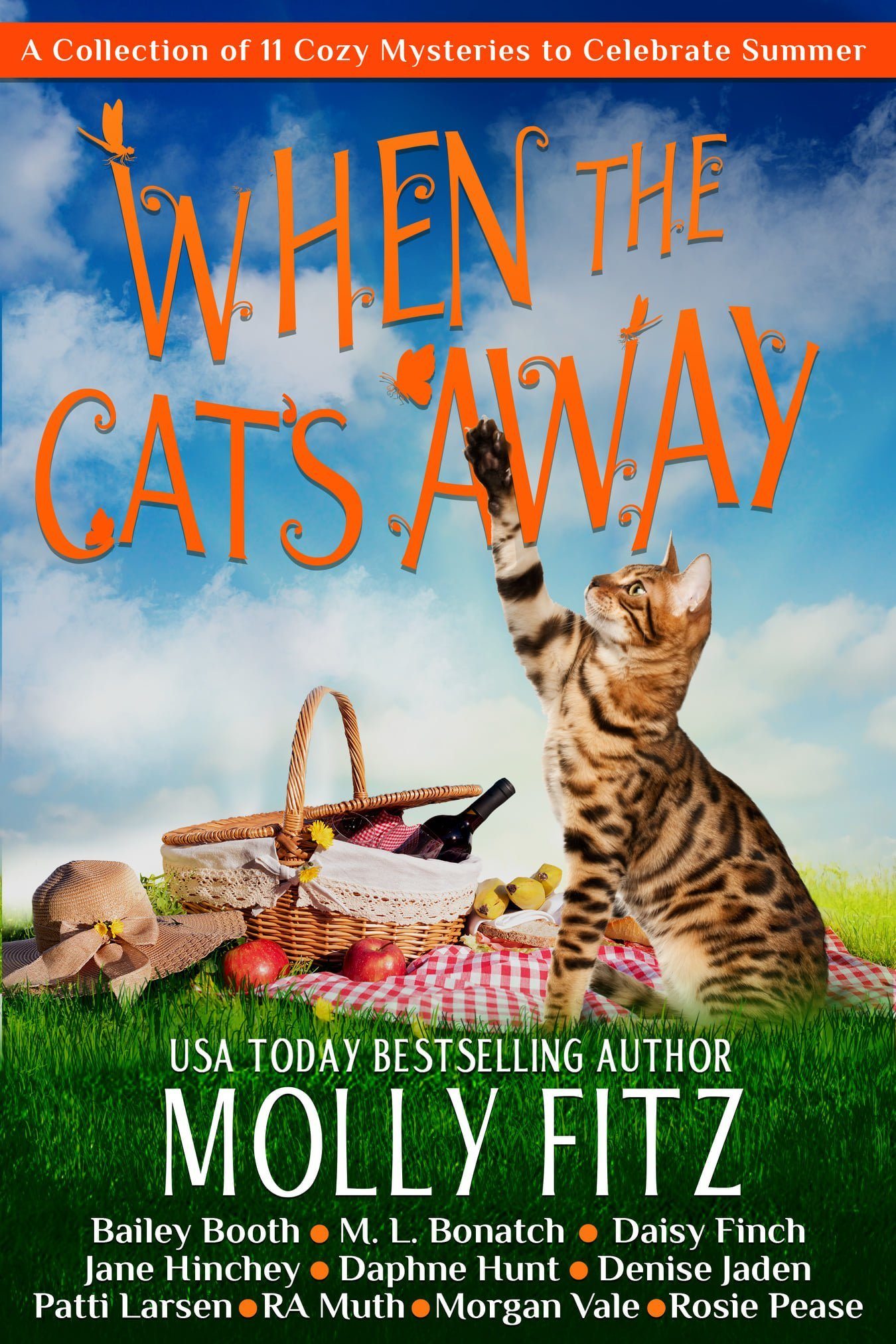 What Ghost Around is my story in the When the Cats Away anthology, releasing on 19 August 2021.

Reserve your copy below:

Witch Way Down Under Giveaway